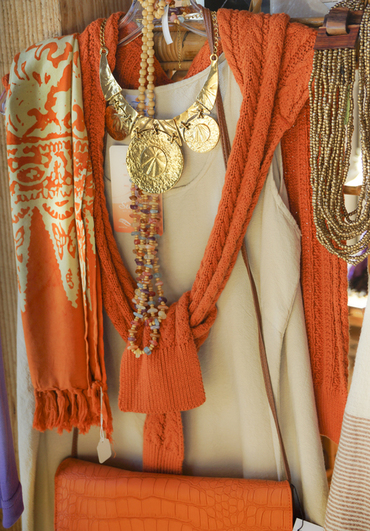 If Bea Connick’s last name sounds familiar, it’s because she’s the aunt of the famous performer, Harry Connick, Jr.   But she’s well known by her own right on the Gulf Coast :  she’s spent ten years as a realtor, worked as an interior designer, owned three different bed and breakfasts and had an antiques business.

Early on in her career life, Connick discovered that her mostly linen wardrobe effortlessly made the transition between business, social and casual occasions.  Her clothing also attracted lots of compliments.  And most importantly, she felt chic and comfortable from morning til night.

So it seemed natural to eventually open a shop selling the clothes that she adored.  Connick began with a space in Maggie May’s Gallery on Main Street in 2006, where she built a loyal customer base over six years.  When the French Settlement building  was completed in 2012, Connick made the move to the elegant storefront facing the beach.  The shop carries the popular Flax brand, as well as designer linens.

Since Connick sees linen outfits as a blank canvas to accessorize, she also carries hats, scarves, belts, shoes and jewelry. She carries both costume and fine jewelry, including  one-of-a-kind pieces by Sid and Pam Yoder, whose label is “Deerworks.”

To create their signature style, the Yoders seek out stones that aren’t ordinarily found in commercial jewelry.  For centerpieces, they gravitate to fossils, antique coins or stones that they lightly facet and leave in a “more natural state.”  Pam says that the many collectors of their work have come to expect the unusual – a fact keeps the couple inspired. Pearl designs by the Yoders are especially popular since they can be worn with jeans, business attire or cocktail dresses.  And with linen, of course.