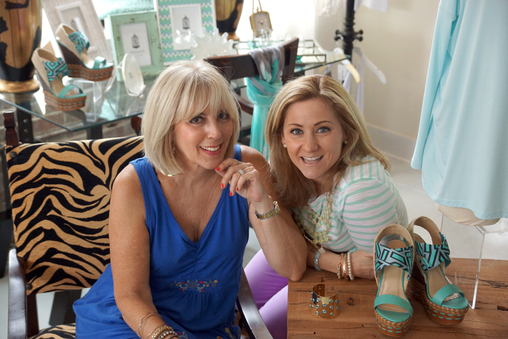 The mother-daughter team of Doris Felder and Ginger Felder Cook have put together a collection of furniture, home décor, and fashion that has established the store as an Old Town anchor and a Gulf Coast favorite.

Uptown Interior is the brainchild of Ginger, who grew up in Bay St. Louis.  While she was majoring in Communications at college in Mobile, she took a job in retail and discovered her first love – and her own hidden talents.  When customers began raving over the shop windows that Ginger designed, the shop’s owner gave the college student more and more responsibilities.  Ginger learned to buy, price, display, wrap, and work with customers, giving her the foundation that would later serve her well in her own business.

Ginger eventually married, had two children and moved “back home” in spring 2005 with the goal of starting a shop in the Bay - one that was unlike anything else in the area.  She and her mother Doris teamed up, got a business license and began purchasing merchandise for the new store.  Ginger’s home – next door to her parent’s house in Waveland – was stuffed with stock when Hurricane Katrina hit in August.  Both houses were completely destroyed.

The mother of a four year old and a six month old at the time, Ginger refused to give up her dream.  She believes now that focusing on the shop was theraputic as the family worked to rebuild their lives.  Doris and Ginger started literally from the ground up and rented the front part of Hairworks Salon in Bay St. Louis, opening their first location of Uptown Interiors just three months after Katrina.  By April 2006, they’d outgrown the location and moved into a larger space on Highway 90.

“My heart was here,” says Ginger.  “I wanted to be a part of getting my hometown back and looking good. I felt like being in Old Town was important.”

Uptown Interiors is now housed in a historic building, with huge windows and exposed brick walls.  The shop, which has become a popular bridal registry spot - is filled with unique furniture and home décor, accented with chic contemporary paintings by regional artists.

In response to customer requests, the store now also carries clothes and fashion accessories as well.  Ginger calls her fashion lines “cutting-edge casual,” saying that she focuses on cotton clothing which is fun and reasonably priced.  Some of the more popular lines that can be found in Uptown Interiors are Beatriz Ball, Candace Mannino Pottery, Flambeau Lighting, Susannah Elle Jewelry, VaVa & Voom.

Ginger has recently revived the event and wedding planning side of her business as well.  She says she goes for the “WOW” factor.  Ginger delights in taking things  “up to the next level,” and bringing the clients’ dreams to life, using creative and contemporary touches that make the events memorable.
Powered by