In 1948, a local physician, Dr. Emmett Erwin, donated land located on Boardman Avenue to the Little Theatre. The membership bought two war-surplus barracks from the Seabee base in Gulfport and had them dismantled. The barracks were shipped by barge to the Bay and reassembled on the donated property.  One barracks was positioned vertically to form the auditorium and the other attached horizontally to form the stage.  The Little Theatre remained there until Hurricane Katrina completely destroyed it in 2005.

After the destruction of the beloved Little Theatre, the Board of Directors decided to continue the Theatre and find a building that was remaining in Bay St. Louis and repurpose it into the Little Theatre. This decision was driven by the fact that very few buildings remained standing after Katrina and rather than let yet another building be torn down, the Little Theatre can lead the way to preserve what was left in our community and set an example that we can build our community again. The Little Theatre property on Boardman Avenue was sold to a private citizen and those funds became the seed money to seek funding and grants for restoring a new theater building.

That particular decision led to a three-year search of fourteen potential theater sites. The Board members would get their hopes up that perhaps the latest property would serve as the Theatre only to have those hopes dashed repeatedly. Seeking property and funding in a community that is decimated and overwhelmed with fatigue and anxiety proved to be a major chore. Everyday seemed to present another overwhelming obstacle to overcome.

Finally, after considering and reconsidering the property many times, the decision was made to make the “This Property is Condemned” (TPIC) building on Blaize Avenue the site of the new Little Theatre. The “TPIC” building had been abandoned for approximately forty years at the time of purchase. It was well-known in the community because of the movie that was filmed on-site. Unfortunately, it was well-known also as the building that received the consistent remark from people when they would drive by the dilapidated, empty structure “Why don’t they do something with that building?”

The deed was signed for the new theater site on December 11, 2007. A bulldozer was on the property that day, facing the Theatre, and was scheduled to demolish the theater building on December 14, 2007.  The Little Theatre building came within three days of being removed from the earth.

The “This Property is Condemned” building was built around 1920 by Andreas Scafide. His grocery store was on the first floor of the building and his residence for his wife and eleven children was on the second floor. The building became empty in the early 1930’s and remained essentially abandoned throughout the years except to house a bottling company that made bottles for the popular New Orleans soda drink called “Dr. Nut” that tasted like almonds.

Then, in 1965, Hollywood came to town. For a brief, magical, Hollywood moment, the town of Bay St. Louis became Dodson, Mississippi, in the major motion picture “This Property is Condemned.” The principal site of the movie was the theater building and the Depot District. Some local citizens were in the movie. The stars of the production were Natalie Wood and Robert Redford. The theater building was the Starr Boarding House. The building was used for the exterior shots and a Hollywood sound stage was used for the interior shots except for one scene. The Redford character stood at a second story window as he looked down to the porch swing where the Wood character is seated. Today, when audiences enter the Theatre, they can see a life-size cutout of Robert Redford standing at this very same window.

After the filming of the movie, the TPIC building was once again abandoned until the Little Theatre decided to make its home there.

The movie is based on a one-act play by Tennessee Williams of the same name. The movie was directed by Sidney Pollack and it was the first screenplay by Francis Ford Coppola. The Little Theatre celebrates its unique connection with Tennessee Williams every year around his birthday (March 26) by holding the annual “Stella Yelling”Contest and performing one of his plays.

The Grand Opening of the new location of the Bay St. Louis Little Theatre was celebrated on October 1st and 2nd, 2010. The community walked through the red front door to their new theater lobby and auditorium. The red front door has meaningful significance for the Little Theatre. The Boardman Avenue theater exterior was corrugated aluminum siding and was painted red. The Board of Directors chose to paint the front door of the new theater red also so that every time audiences, casts, or crews enter the Little Theatre, they are reminded of the creative energy and effort that is in the Theatre history since 1946.

The Grand Opening was attended by 1200 people of the community. Blaize Avenue, the street in front of the theater, was shut down because of the overflow of people attending the opening. The child stars from the “TPIC” movie, Jon Provost and Mary Badham, flew in from Hollywood to specifically attend the Grand Opening. They spent three days in our community participating in the Grand Opening events including taking the stage during the first night of the opening and sharing behind-the-scene- stories of the filming of “TPIC” from 1965.  Jon Provost is best known as the character “Timmy” from the 1950’s TV show “Lassie.” Mary Badham is well known from her portrayal of the character “Scout” in the movie “To Kill a Mockingbird” starring Gregory Peck.

The Bay St. Louis Little Theatre was born again because of a small group of Board members who persevered to for years overcome its Katrina demise. Generous grants were awarded by the Mississippi Arts Commission, Mississippi Department of Archives and History, and the Leo Seal Family Foundation, along with thousands of individual donations.

Since opening, the Little Theatre has attracted members from New Orleans, Hattiesburg, Mobile, and the entire Gulf Coast. It sold out every seat in its first two years of performances.  The Theatre has maintained a high standard of production quality and almost every show includes veteran and first-time actors.  The Theatre has the unique ability to diversify its auditorium to adapt to the demands of any type of show. The stage can be positioned in any part of the auditorium because the seats, risers, sound and lights, and lighting can be rearranged. The Theatre can do traditional stage shows as well as theater-in-the-round, dinner theater, juke joint jams, concerts, and dance halls.

The Bay St. Louis Little Theatre is an official Mississippi Landmark. Since its Grand Opening in 2010, it has been awarded the Governor’s Award for Excellence (the first and only community theater to be selected for this award), the Hancock County Chamber of Commerce Award for Community Excellence (by unanimous vote), the Bay St. Louis Historic Preservation Commission “People’s Choice Award”, the Bay St. Louis Historic Preservation Commission “Heritage Award”, and the Mississippi Department of Archives and History “Mississippi Heritage and Trust Award.”

As a final note, the Bay St. Louis Little Theatre received many helping hands and steady encouragement during the years after Katrina when there was no theater building and each production required extraordinary effort to provide a venue for the “homeless” Theatre. The Bay St. Louis Little Theatre will be forever grateful to John Holmes, Emily DeMontluzin, Steve D’Angelo, Jon Trimmer, Father Sebastian, Mayor Longo, Rev. Allen Jenkins, Bay City Grille, St. Rose de Lima Church, P’Zazz Restaurant, Long Beach Lodge, First Missionary Baptist Church, Waveland Civic Center, and the Mary C. O’Keefe Cultural Center. Each of them provided unwavering encouragement and supportive venues during the time that the Little Theatre was searching for and building a new home.

The show must go on.   The best is yet to come. 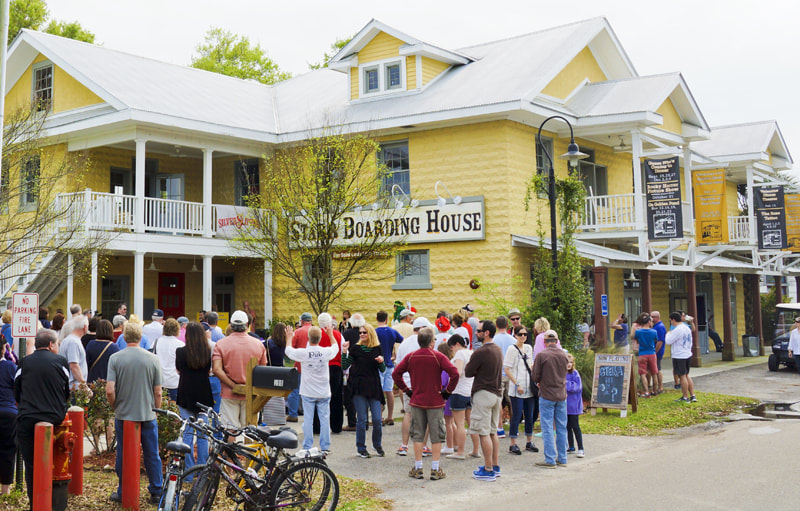